For Gatwick flight delays or cancellations, you could be entitled to compensation up to 600€ under EU law EC 261.

Enter your flight details and check how much you can claim.

Are you one of the victims facing delays or cancellations, left stranded at London Gatwick Airport, and don’t know how to go about it?

Here is all you need to know when your flight was delayed or cancelled. You may have the right to compensation or refund from the airlines.

Find out in just 2 minutes

What to do if your flight was delayed or cancelled?

Under EC Regulation 261/2004, air passengers are entitled to compensation or refund from the airlines for longer flight delays, cancellations and denied boarding due to overbooking.

In these cases, you can claim compensation, if the airline was responsible for …

Your rights for Gatwick arrivals delays

How much can you claim for Gatwick Airport delays?

Your rights for departure delays

When the flight delays over 2 hours, the airline must offer you …

For flight delays of more than 5 hours

Important: If your flight was diverted to any other airport and you reached the final destination later than 3 hours, you could be entitled to compensation up to 600€.

Under EU law, you could be eligible for compensation or a refund for flight cancellations without prior notice of at least 14 days.

These are the two available options for you to choose …

If your alternate flight delays for more than 2 hours, you could be eligible for compensation. You can claim compensation between 125€ and 600€ depending upon …

How to claim compensation for LGW delays?

Let us fight for your rights !

Gatwick Airport is known to be the second busiest airport in London as well as in the United Kingdom after London Heathrow Airport in terms of passenger traffic.

It is one of the leading airports for operating direct flights. It has the busiest single-use runway, with a maximum of 55 flights movements per hour.

The IATA code of Gatwick Airport is “LGW”.

Gatwick Airport has two terminals, North Terminal and South Terminal. Both are connected, whereas not after the security check. 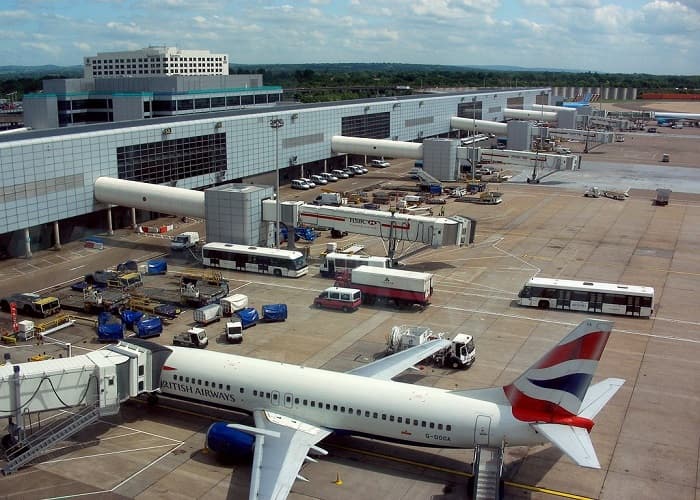 North Terminal: Whether you are travelling for holiday or business, you will find all the facilities at this terminal such as hotels, car parking, shops, communication, and self-service facilities.

South Terminal: There are a huge variety of facilities available at this terminal too. It is hugely beneficial from modern security solutions. It has plenty of space and requirements for any traveler, from WiFi service to shopping and dining facilities.

Both the terminals have shops, restaurants and there are different kinds of facilities provided for children, business travellers and for disabled passengers.

There are a number of low-cost transfers available to the airport, you can reach easily by taxis.

For Gatwick Airport departure and arrivals takes place at both the terminals: South and North. At the entrance of the terminals, you can find your check-in desks over the information boards.

Get all the latest news or updates on scheduled flights, arrivals and departures etc. on their official website here.

There is a lot of information to take in, right?

If you have any further questions to determine whether you can claim or not, read the following guides.

Risk of losing money if he loses the case

No cost risk, only pay if we win

Just 2 minutes of your time spent