For Heathrow flight delays or cancellations, you could be entitled to compensation up to 600€ under EU law EC 261.

Enter your flight details and check how much you can claim.

Are you one of the victims facing delays at Heathrow, or cancellations, and don’t know how to go about it?

Here is all you need to know when your flight was delayed or cancelled. You may have the right to compensation or refund.

Find out in just 2 minutes

What to do if your flight was delayed or cancelled?

Under EC Regulation 261/2004, air passengers are entitled to compensation or refund from the airlines for longer flight delays, cancellations and denied boarding due to overbooking.

In these cases, you can claim compensation, if the airline was responsible for …

Important: You do not have to be an EU citizen to claim compensation for London Heathrow (LHR) delays. You can claim for flights’ departed from LHR Airport with any airline, or arrived at LHR Airport with a EU-registered airline.

How much can you claim for Heathrow Airport delays?

When the flight delays over 2 hours, the airline must offer you …

For flight delays of more than 5 hours

Important: If your flight was diverted to any other airport and you reached the final destination later than 3 hours, you could be entitled to compensation up to 600€.

Heathrow flights’ cancelled without prior notice of at least 14 days, you can either apply for a refund, or you may ask for an alternate flight.

If your alternate flight or re-scheduled flight delays for more than 2 hours, you could be eligible for compensation under EU law.

The amount of compensation is between 125€ and 600€ depending upon …

How to claim compensation for Heathrow Airport flight delays?

With ClaimFlights, you can ask for compensation in just 3 simple steps

On a successful claim, we charge a success fee of 25% + VAT, and left payment is directly paid into your bank account. We do not charge any admin fee, or wire transfer fee.

Let us fight for your rights !

As one of the largest airports in the world, Heathrow Airport has its own string of challenges as it has to deal with a large stream of passengers on a daily basis.

Heathrow, LHR Airport is the second busiest in the world by international passenger traffic and also ranks the world’s seventh busiest airport in terms of passengers’ traffic.

As per the Wikipedia report, In 2019, total passengers traffic of Heathrow Airport was around 80.9 million passengers.

Along with Stansted, Luton, Southend, London City, and Gatwick, Heathrow is one of six airports with scheduled services serving the air passengers to or from London, UK.

The IATA code of Heathrow Airport is “LHR”.

London LHR Airport serves as the main base for Virgin Atlantic Airline and is operating as a hub for British Airways.

The Airport has four terminals: Terminal 2, Terminal 3, Terminal 4 and Terminal 5. All terminals lie within the Travel Zone with free travel between the terminals.

Terminal 2 is also known as Queen’s Terminal and it has all the facilities for a traveller such as 52 shops, cooling station for chilled water and bars.

Terminal 4 is connected to Terminal 2 and Terminal 3.

You can avail Heathrow Express trains and the Underground Piccadilly line for transfers from Terminals 2 and 3 to Terminals 4 and 5. 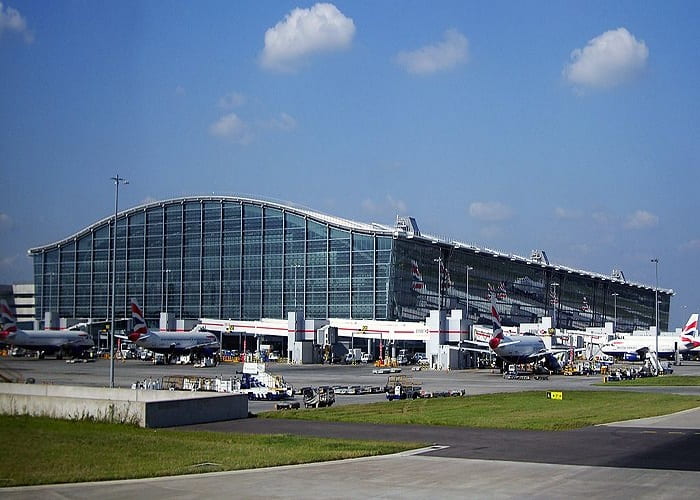 There are several check-in zones available across all the terminals. Airport has many check-in facilities such as Terminal 2 has self-service check-in machines, online and mobile check-in.

Get all the latest news or updates on scheduled flights, LHR arrivals and departures etc. on their official website here.

The major cause of Heathrow Airport weather warnings and frequent delays is due to the snow or ice over the runways. Weather warnings could come down to lots of causes such as wind, snow, fog and heavy rainfall.

In such circumstances when it’s not your fault, you should check your flight’s status and speak to the airline crew, or alternatively read on your rights.

There is a lot of information to take in, right?

If you have any further questions to determine whether you can claim or not, read the following guides.

Risk of losing money if he loses the case

No cost risk, only pay if we win

Just 2 minutes of your time spent